I tried Go and I liked it

Say hello to Gopher. Gopher is the mascotte of a new language from Google, called Go, with the capital G.
Not a very clever name from a search engine company, if you ask me, but that’s probably the only bad thing you will hear about it.

Hint: use the word golang to search on Google

Created inside Google by Ken Thompson and Rob Pike, fathers of Unix and UTF-8, to overcome the limitations of C++ (compile times being the most annoying), Go is a concurrent, garbage-collected language with fast compilation.

Its real strength is just simplicity.
As Rob Pike once said, less is exponentially more and I strongly agree with him.

You can download Go from the golang.org website.
There are packages for many different platforms (Linux, Windows, Mac OS, BSD) and architectures (x86, x64, ARM).
Detailed instructions can be found here.

First steps and getting help

You should now have a working installation of the Go development environment, but if you come from Ruby or Python, you might get lost while reading someone else’s code or trying to figure out which is the idiomatic way to solve a problem in Go.
No worries, Go has an answer for that too.
Included in the package there is godoc.
When launched with the -http param, godoc act as a web server that present the documentation in form of web pages. This is a typical godoc summoning ritual

My advice is to read carefully How to write Go code and Effective Go before starting writing Go code.
Go does not provide REPL, but you can try your snippets in the Playground.

NOTE: every package you install with the go tool or write by yourself, will update the documentation as well.

SHUT UP! SHOW US THE CODE!

This is our first Go program.
Every client that connects to localhost, port 8080, will receive the “Hello World!” message.
The example looks a lot like the Node.js hello world web serve example, but unlike Node.js, this code is already multithreaded. Every new client is served by a goroutine, that the net/http starts behind the scenes, taking advantage of concurrency and multiple cores, if present. Talking about simplicity, is there anything simpler than that?

Note: To run the code you have to save it in a file and then execute go run <filename> from the console

Let’s explore the code above in more detail:

The first statement in a Go program must always be

Executable packages have to reside in a package called main.
The entry point function is called main as well.

or you can group them together, surrounding the imports with parenthesis, like in our example.

Variables are declared name first, then type.
If you declare and assign, you can let the compiler infere the type.

Of course statement grouping is available too

Don’t worry about lining up the elements between the brackets, gofmt will take care of it for you.

Go support anonymous functions and high order functions.
Functions are first class citizens in Go and can be assigned and carried around like regular variables.

Let’s now improve our web server with new functionalities.
We want to send out an X-Powered-By header with the name of our web server.
What we need to do is define a new type that act as handler for the requests and will append the new header to the default set of headers.
In Go, an http handler is any object that implements the Handler’s interface, and the Handler’s interface contains only one method: ServeHTTP.
So we are going to create a new object that implements the ServeHTTP method and pass it to ListenAndServe.
Instead of classes, Go uses structs.
In this case it is an empty struct, but it can contain any other type as member variables (more on this later).

We now pass the new handler to the listener

Every time a client connects, it doesn’t receive any message back, except for the new header.

Nice, but not very interesting, plus we lost the ability to serve the content to the client, cause the handler function we declared before is not getting called.
How can we fix that?
Before explaining how to forward the call to the default handler, we’re going to modify our middleware to do something different.
In addition to adding the header with the artist’s signature, we want to limit the ability to visit our web site through one and only one specified host.

Rewrite ServeHTTP to check for the host validity 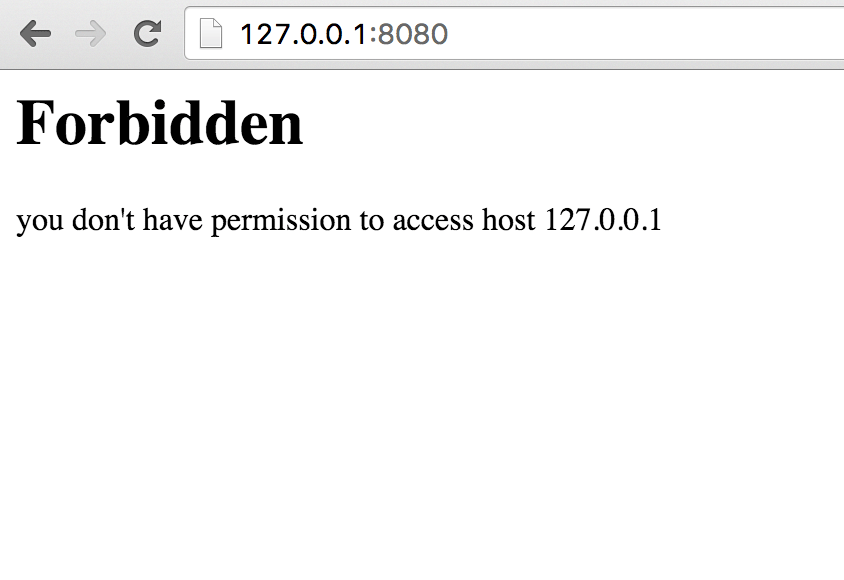 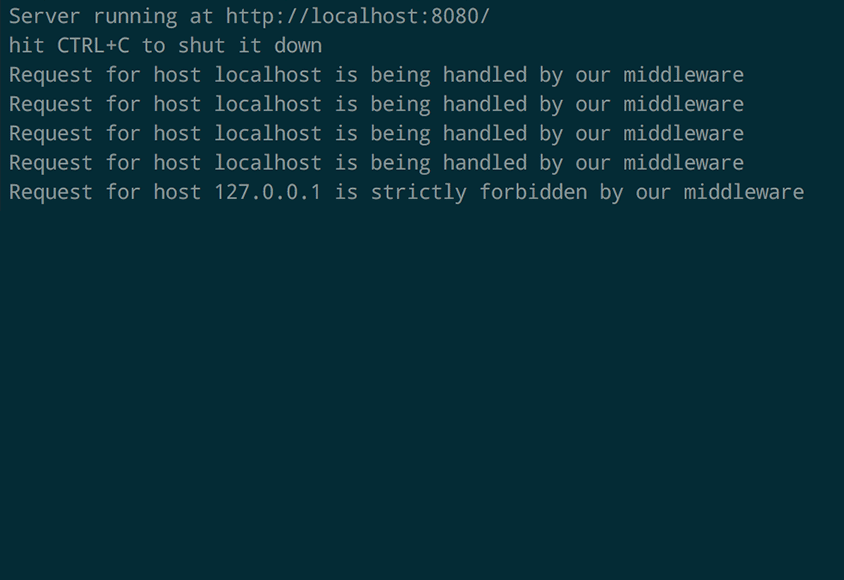